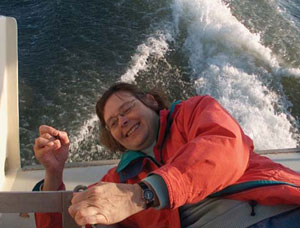 It’s been nearly 40 years since I started graduate school in physical oceanography, aiming towards a career in physics that wouldn’t see me stuck in a windowless basement laboratory all my life. In the course of those years, some things about the life of women in oceanography have improved, some have stayed the same, and some have markedly deteriorated.

What’s improved? Well, now there are women in physical oceanography. In the mid-1960s, as far as I know, there were only three women: myself, Barbara Hickey, and Jane Huyer (all, oddly enough, Canadian by birth).

Now there are many more. It is also now a given that women have as much right to go to sea as men, with shipboard facilities evolving in response. No more hanging a sign on the (only) bathroom on the ship and trying to be super-fast in the shower so as not to restrict access to everybody (male) else. No more (I hope, though I’m actually not sure) being told that you can’t overnight (!) on a U.S. Navy research submarine, despite being a principal investigator on the project. What’s unchanged? An adequate and assured supply of worksite daycare still hasn’t become the norm, in either academic or research settings. In the coming wave of baby-boom retirements and the ensuing struggle for qualified faculty/researchers (believe it), organizations that have failed to deliver worksite child care will rue the day that “economic” decision was made—or worse, not even considered as the institutional imperative that it will be. In the meantime, women (and their partners) still have to stress over child care arrangements. What’s gotten worse? The pace (due to modern communications) and the pressures of a research career, particularly when exacerbated by the addition of academic responsibilities, have increased steadily. While this is a cross-gender issue—many men would also prefer more time for family and life other than science—it affects women scientists disproportionately: they frequently have alternatives and often take them, dropping out entirely or identifying and moving into less-stressful roles. If we are not to continue losing the research contributions of highly educated women oceanographers, institutional structures must change.The paucity of women in the early stages of my career meant that most of my colleagues and mentors were male. I’m grateful for this opportunity to thank those who gave freely of their encouragement and support, and in the earliest days fought for my participation in cruises and meetings: one of the greatest rewards of my career has been the friendships thus forged. My professional life was additionally blessed by a job situation that allowed me room to raise a beloved daughter as well as indulge a love of oceanography. While I slightly regret that my attention span for any particular topic has never allowed me to become “the” expert on anything, I’ve never thing, I’ve never been bored.