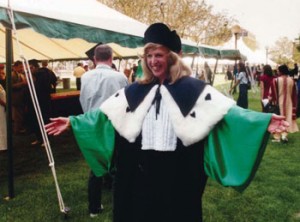 Paola Malanotte-Rizzoli in the robe of her “alma mater,” the University of Padua, at the MIT graduation ceremony. Th e color of the sleeves lining indicates the specialty, with emerald green representing physics. The University of Padua is the second oldest in the world, founded in 1021 after Bologna (988). It was the ﬁrst university to admit women in the 1550s.

I first attended the University of Padua, Italy, where I obtained the Italian doctorate in physics, summa cum laude, with a thesis in quantum mechanics. After one year as postdoctoral fellow in Padua, in 1970 I joined the Istituto Studio Dinamica Grandi Masse, established by the Italian National Research Council after the famous Venice flood of November 1966 to investigate the problems affecting Venice and its lagoon. The high water itself is produced by the storm surges of the Adriatic Sea, and my first study was the construction of numerical models for the prediction of sea level in Venice. In 1971 I started visiting the Scripps Institution of Oceanography (SIO). Between 1971 and 1975, I commuted between Italy and California, working at oceanographic issues related to the Venice problems, specifically modeling the Adriatic general circulation and wind-wave field responsible for the destruction of the lagoon coastline during the storms.

Always commuting, I completed a Ph.D. in physical oceanography at SIO between 1975 and 1978. My Ph.D. thesis focused on the investigation of the dynamics of coherent structures (i.e., strong oceanographic and meteorological flow structures endowed with long lifetimes, such as atmospheric blocking and cold/warm rings in the ocean that are shed by jet-like boundary currents like the Gulf Stream). These flow features violate the principles of “chaos,” that is, the intrinsic unpredictability of most atmospheric and oceanic flows. Between 1978 and 1980, I was at SIO with a Green Scholarship. In 1981, I joined MIT as Assistant Professor, hired by Professor Ed Lorenz, the discoverer of chaos, whose work had been the motivation of my thesis. I obtained tenure in 1987 and am now Professor of Physical Oceanography. Since 1997, I have also been the MIT Director of the MIT/WHOI Joint Program in Oceanography.

My current major research interest is modeling the tropical Atlantic circulation and its interactions with the subtropics, with focus on the coupled ocean/atmosphere modes of variability, which are of crucial importance for climate. Past research interests include modeling of the Gulf Stream system with emphasis on nonlinear wave-mean flow interactions, and biophysical modeling of the ecosystems of enclosed and marginal seas, such as the eastern Mediterranean Sea and the Black Sea. A major interest of mine since the late 1980s has been in data assimilation in ocean models, the most recent effort being on ensemble approaches. Finally, since 1995 I have been working again at the Venice problem as a consultant for the construction of the mobile gates designed to close the lagoon inlets and protect the city from the floods.