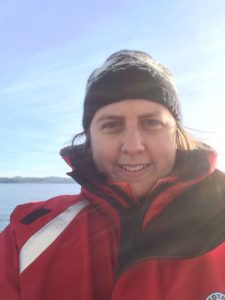 I am the staff scientist at Rockland Scientific, which is a small instrumentation company specializing in the measurement of turbulent flow. In my current role, I act as the liaison between our customers and our staff. Essentially, I do two things: (1) help scientists make successful measurements through education and software development, and (2) help our engineers and developers design instruments that suit the continually changing needs of scientists. In doing so, I enable interesting and diverse science done by many different research groups, and also participate directly in the occasional research project.

My “Road to Rockland” was non-linear because I didn’t exactly plan to do a PhD. In fact, in grade 12, I had to google what BSc, MA, PhD, etc. were, just so I could fill out my university applications. Since then, there are three opportunities that I seized that shaped my career:

My academic experience, and in particular my PhD, allowed me to develop many skills that I use on a daily basis. I obtained a background in physical oceanography and turbulence that helps me to understand the science that our customers are doing. I also learned to write clearly and concisely and to present complex ideas effectively, which are skills that I use to write technical documentation and to teach training courses. And, I continue to use my data analysis experience to interpret data and to develop software tools.

My decision to pursue a career outside academia felt easy because the job at Rockland really interested me. I wanted to continue learning about turbulence, and I was keen to live in Victoria because the city was well-suited to my lifestyle. But, as my day-to-day responsibilities started to shift away from research, I found myself questioning my decision. Also, my “imposter syndrome” kicked in as other scientists asked why I “left academia”, as if my career choice was a lesser option. Over time, as I got better at my job and gained some perspective, I realized that my role at Rockland is nearly perfect for me. Sure, I don’t do as much research as I used to, but I help a lot of people do amazing science. And, that is pretty rewarding!