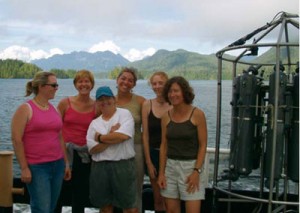 Over the course of my career as a physical oceanographer, my research focus has moved from “blue water” studies of the advection and diffusion processes that govern circulation in the South Atlantic Ocean, to coastal circulation studies off northern California, to investigating various marine environmental issues in estuarine systems in the Pacific Northwest. Currently, I am part of two interdisciplinary teams of marine scientists: one studying harmful algal blooms in Puget Sound, and the other exploring the physical, chemical, and biological oceanographic conditions in the fjords of Barkley and Clayoquot Sounds, British Columbia, Canada. My present areas of research also include local watershed studies and investigations into various science education pedagogical techniques particularly useful for hands-on, field-based activities in environmentally related courses.

I have always wanted to be a scientist and decided, at age ten, to combine my love of science, the ocean, exploration, and the outdoors and become an oceanographer. I received my B.S. in physics from Moravian College and went on to earn my doctorate from Lamont-Doherty Earth Observatory in physical oceanography. Since the completion of my degree in 1986, I have taught at a number of universities and colleges and worked in the consulting industry as a scientist and manager specializing in applied oceanographic and environmental research. My undergraduate education at a small liberal arts college, combined with graduate work at an institution that fostered international, interdisciplinary scientific research, have provided me with a strong academic foundation. Working in consulting gave me real-world, hands-on experience and the opportunity to do more applied coastal and estuarine oceanography. Each of these experiences has played a key role in shaping my professional development and has served me well in my present, somewhat unique, position of helping to build a new university.In 1996, I was hired as one of the first two scientists at a new campus of the University of Washington in Tacoma. UWT, founded in 1990 as a two-year, upper-division public undergraduate institution, was established as an urban, commuter campus designed to increase access to four-year baccalaureate degrees for place-bound, time-bound students of the South Puget Sound region. My mission, along with my one scientifi c colleague, was to build an environmental science curriculum that would integrate all the natural sciences (non-existent to this point) into an interdisciplinary framework serving primarily non-traditional students on a campus growing at 15% a year. When we started as junior faculty members, the entire campus was in rented space; we had no equipment, labs, or scientific facilities. During the next nine years, we created an interdisciplinary environmental science curriculum built around student involvement in hands-on/field-based activities, undergraduate research and internships; forged relationships with potential outside collaborators for integrated research, education, and community service opportunities; established an Environmental Science B.S. degree; designed and built a science building; and hired three more science faculty and a lab coordinator. We now teach about 60 Environmental Science majors and 500 non-majors annually on a campus of 2000 upper-division undergraduates. This has been an extremely challenging, but exciting opportunity. One doesn’t get to build a new university everyday.